We present this article based on a client’s request for improving their contact tracing efforts during the COVID-19 epidemic. Their RFID/NFC ID cards are currently only read upon entry to the facility. That provides facility presence timestamps but they also wanted to capture presence at multiple locations within the facility and at remote locations.

RFID/NFC IDs are often used with facility access control systems. However, extending those systems can be challenging. For example, adding multiple locations within or outside the facility can be costly and time-consuming. Also, deployment at remote locations, such as a construction site, can be expensive, especially when those locations are temporary and the cost is not amortized over many years. What options are available? 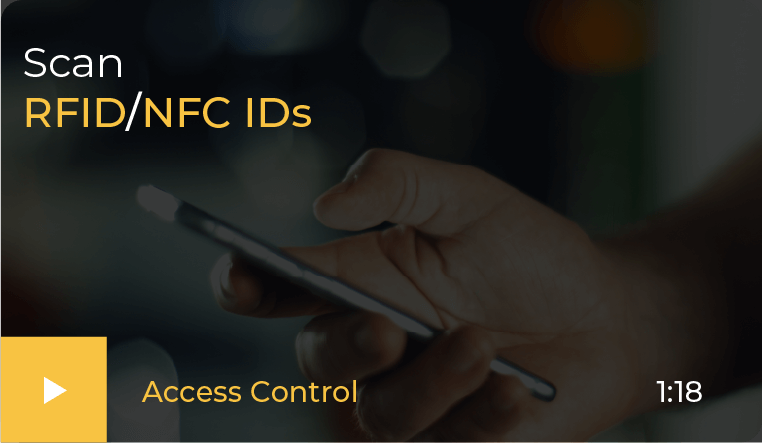 However, the more commonly used RFID/NFC access IDs cannot be read directly with iOS or Android OS devices. Instead, a reading accessory is necessary.

For both direct and accessory reads, the CodeREADr app will automatically sync the ID, timestamp, location, and other collected data to the cloud for reporting purposes. Also, you can issue newly printed digital IDs with barcodes or QR codes for attendance tracking if that’s a better option for you than a reading accessory. Click here to learn more attendance tracking with QR codes.

The CodeREADr app is specifically designed for iOS devices (iPods, iPads, iPhones) and Android OS devices (smartphones, tablets, Chromebooks, and dedicated mobile computers). Learn about general requirements for iOS and Android devices, touch computers, and more. The most common capture method for attendance tracking is scanning IDs that have barcodes. The CodeREADr app uses the device’s front-facing or rear-facing camera to scan virtually all barcode types, including QR codes.

Unfortunately, many of the existing ID cards do not have barcodes printed on them. Instead, they have NFC or RFID/NFC chips embedded in the card. The CodeREADr app can read IDs with embedded NFC chips by using the device’s built-in NFC reader. There’s a setting on the Advanced step with creating or editing your services to select NFC reading. However, some access cards with embedded RFID/NFC chips cannot be read with the built-in NFC reader.

For those cards, you need a dedicated RFID/NFC reading accessory with a USB-A to USB-C adapter to read those IDs. Since the reader draws its power from the connected device and since almost all smartphones have only one connector, this limits usage based on battery consumption. We tried to find a multi-functional adapter that allowed powering the smartphone and connecting the reader but unfortunately, we couldn’t find one so far.

Chromebooks launched during or after 2019 can generally run Android apps downloaded via Google Play or side-loaded via an APK file (contact us). See the list of all models capable of running Android apps, published by Google.

Also, you can shop Google’s Chromebook here. The Chromebook’s webcam can scan barcodes. We found webcam scanning with our app’s SD PRO camera scan engine to be very fast on the ASUS Chromebook Flip C101PA. Though that model has apparently been discontinued, there are others that would likely be good as well.

An RFID/NFC reading accessory can also be connected to most Chromebooks. We recommend Chromebooks with both a USB connector and a separate power connector because the accessory draws its power from the Chromebook.

Scanning Barcodes with PCs and Macs

One of those programs is the BlueStacks App Player. It enables Android applications to run on PCs running Microsoft Windows and Apple’s macOS. Bluestacks focuses on gaming so the system requirements are higher than those available on the lowest cost PCs. However, CodeREADr doesn’t use system resources as gaming applications do. Therefore, it worked well for us on the low-cost Windows Acer Aspire A515-54 laptop.

A PC’s webcam can scan barcodes. Also, the Windows Acer Aspire A515-54 laptop, the webcam scanned well. However, we got an inverted view from those.

But, you can connect an RFID/NFC reading accessory with Chromebooks. Also, we recommend that the PC have both a USB connector and a separate power connector.

This RFID/NFC reader is the dual-frequency Wave ID Plus from rf IDEAS, model “RDR-80581AKU Desktop Keystroking Reader”. From their specification, this accessory is capable of reading most RFID/NFC cards available on the market. You set up the reader for the keyboard emulation mode. It uses a USB connector so the CodeREADr app would need to be installed on a device with a USB connector, e.g. a Chromebook.   Visit their website to learn more about Wave ID Supported card types.