On the Advanced step, when creating or editing your services, there’s an option under the “Capturing” section to “Configure NFC capturing”. 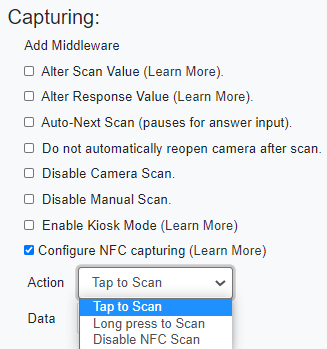 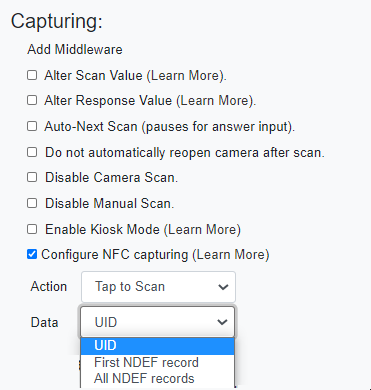 What NFC Objects can be Read?

iOS devices: The NFC object needs an NFC tag that is NDEF-compliant. The app will capture either the NFC chip’s UID or the NDEF content, not both in the same record.

Android OS devices: The NFC object needs an NFC tag that is NDEF-compliant if reading content other than the UID. Android devices can capture both the NFC chip’s UID and programmed NDEF content. They can also generally read just the UID of NFC chips that are not NDEF-compliant.

If you want to read an NFC object that is not NDEF-compliant, please contact our support team. You will need to indicate the target NFC tag and your intended use.

To read RFID/NFC tags, a reading accessory is required. We’ve detailed reading, tracking, and validating RFID/NFC tags in this article.

Last Updated: 2 months ago in Barcodes and More