Photo verification of people or assets can be accomplished in three ways.

You can use the codeREADr app to scan a barcode and then take a photo and capture associated data. Here we refer to using it for ID verification but the technology can also be used to capture and subsequently view captured photos of any asset, location, etc.

With photo postback, the scanned ID is auto-inserted into a cloud-based database hosted by codeREADr and the corresponding photo is stored in a special folder on your Dropbox account or FTP server and directly linked to the scanned barcode’s value (ID).

When that ID is scanned again, the app will automatically display the corresponding photo along with any other content you want to display to the app user at the point of service.

Because the ID is auto-inserted into the associated database, you have the option to start with a blank database. We detailed the database building process here – it’s called Database Builder with Postback URL. You will need two services, both associated with the same database. The first service captures the photo and links it to the barcode value in the database and the other service is used to show the captured photo when that barcode value is scanned.

Here’s a video showing the result:

Using our Webify feature with an existing database of photo URLs, each associated with an ID, you can display the photo to the app user when the corresponding ID is scanned. How? When you upload your database to codeREADr’s servers you will need to include an HTML tag.

Column 1 is the barcode value (ID)

Here’s an example of an HTML tag (look for text to copy here):

And this is the result: 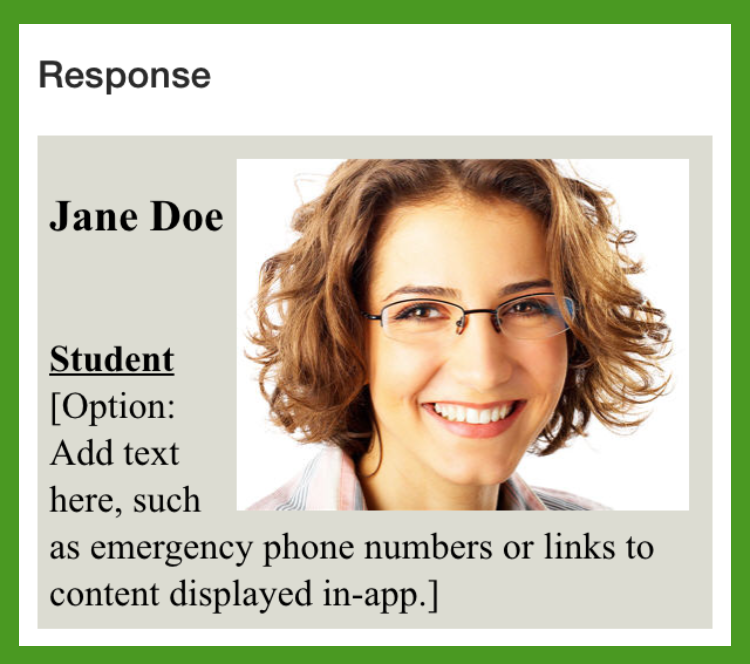 To show just an image after a scan, the most basic HTML would be this placed in column 2 of the database:

As an alternative to placing the entire HTML string in every column 2 field, you can instead place structured text in column 2 and create an Alter Response HTML Template.

Note for Dropbox users.  If your images don’t require authentication to view but your images are breaking within the app’s response view, you’ll likely need to make a minor change to your image’s URL. Here’s an option one client suggests:  At the end of the URL change the ?dl=0 to ?raw=1.

When using your own servers with PostbackURL or Direct Scan to URL (DSU) service types, you can post back to the app with an HTML tag as you would with the Webify option noted above.

Last Updated: 2 months ago in Services